The results of the British and Irish Underwater Photography Championships 2015 were announced today and I was delighted to learn that I been awarded both wide-angle category winner and the overall title of BIUPC Champion 2015. 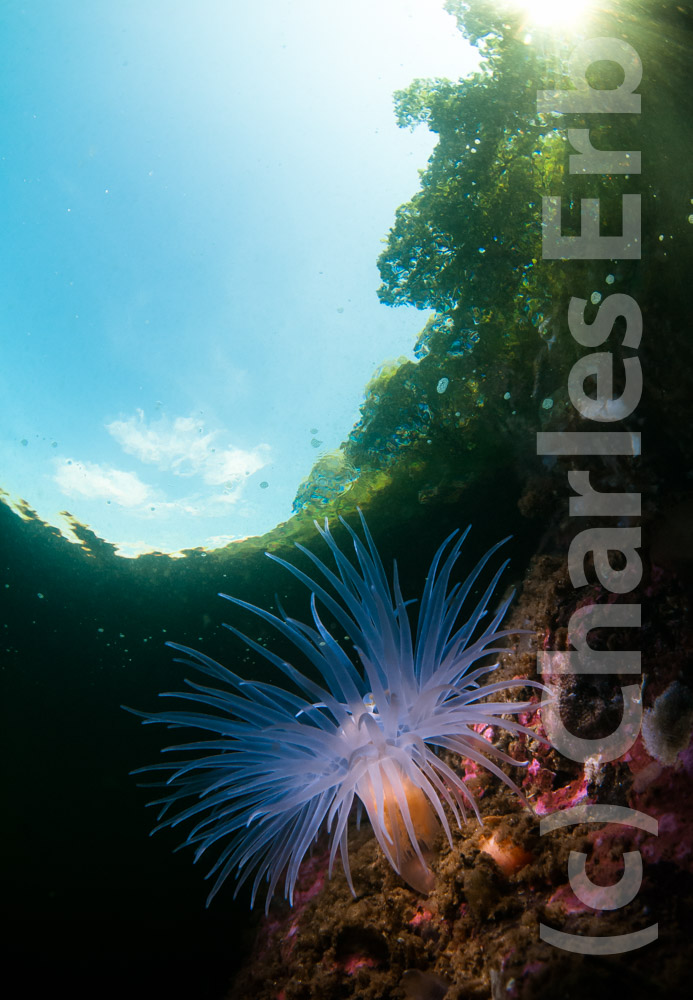 The winning image was an in-camera composite of two images taken at the same site in Loch Long in SW Scotland. The competition is an on-the-day event, where competitors could capture images at any site in Britain and Ireland, but the images had to be captured within a 24-hour window and submitted electronically before the end of the day. The image made the news here too

The weather leading up to the event had not been great and the vis reports from the South coast of England had not been good, so my buddy Trevor Rees (who won the compact category) and I chose to make the long drive to Scotland from our homes in the midlands. A round trip of over 700 miles in 48 hours was worth the time on the road, as we were able to complete four dives each on the day for a total of over 250 minutes underwater. This allowed us plenty of dive time to nail the shots we wanted when conditions were perfect (and it was a lovely day that Saturday).

Traditionally “wide angle” and “macro” were types of image dictated by the narrow range of lenses available to underwater photographers. Nowadays the range of cameras and lenses used underwater produces a sort of continuum with no clear boundary between the two. I wanted to create an image which sat firmly in the “grey area” between the two and showed a small creature large in the frame, but with a dramatic depiction of its environment.

The foreground image is of a Sea Loch Anemone (Protanthea simplex) which is a very small creature common in Scottish lochs. I used a macro lens (Nikon 60mm) and a narrow snoot to make sure that only the creature itself was illuminated and the rest of the frame was black.

I then got out of the water and switched to a wide angle lens and shot a variety of shots looking up out of the water. I was attracted by the lovely green colours of the trees, seen through the water’s surface. On that sunny day, I also worked hard to create a sun burst too, although it is difficult with my camera (a 10-year old Nikon D200) and very easy to burn out the highlights. 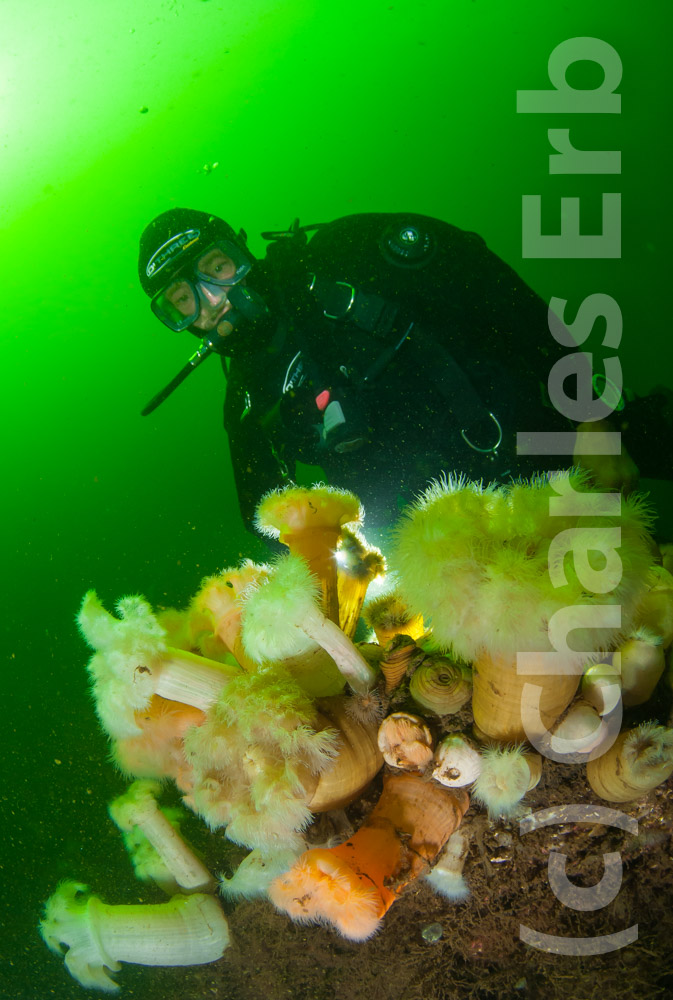 When I had a pair of images I was happy with, I combined them in-camera with the image overlay function (I had checked in advance that this was allowed within the rules). The rules allowed for very limited editing of the image, so I adjusted levels, colour balance and sharpening on the raw files and converted to JPG.

I also spent some time with my patient model, working on a more traditional close-focus wide angle image. The visibility was about 4m, so I had to keep both my model and subject close to the camera to maintain impact. It was also a struggle against the suspended particles and the fine silt easily stirred up from the sea bed. Images taken in strong sun in the afternoon on a rising tide were definitely superior to some earlier shots with weaker light and more turbid water. This image was Highly Commended.

Being in an area with very poor phone signal, we had a bit of a pantomime being able to upload the images, but were glad to find a bar in Arrochar with wi-fi (thank-you Ben Arthur’s Bothy!) so Trevor and I could submit our images. 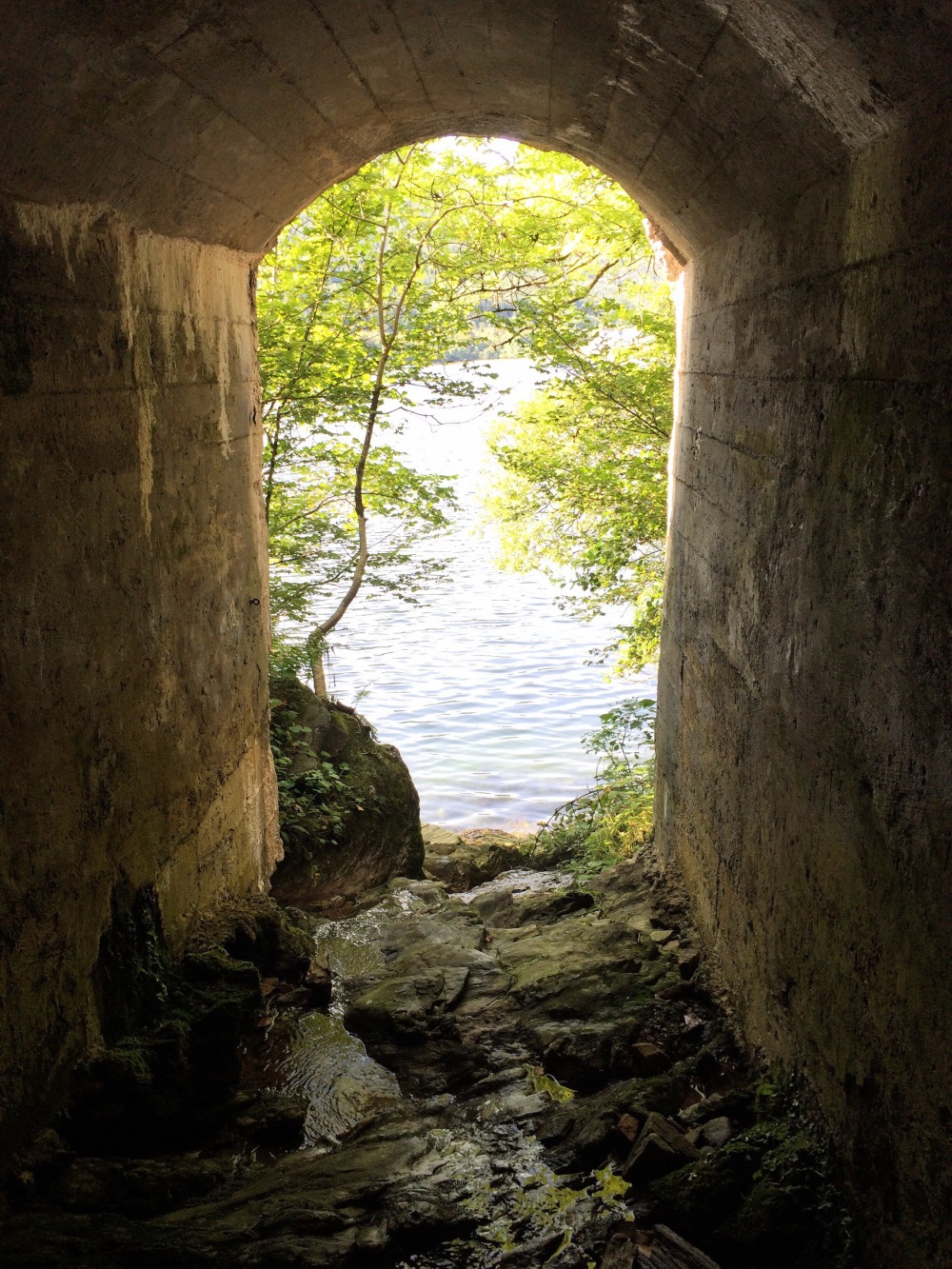 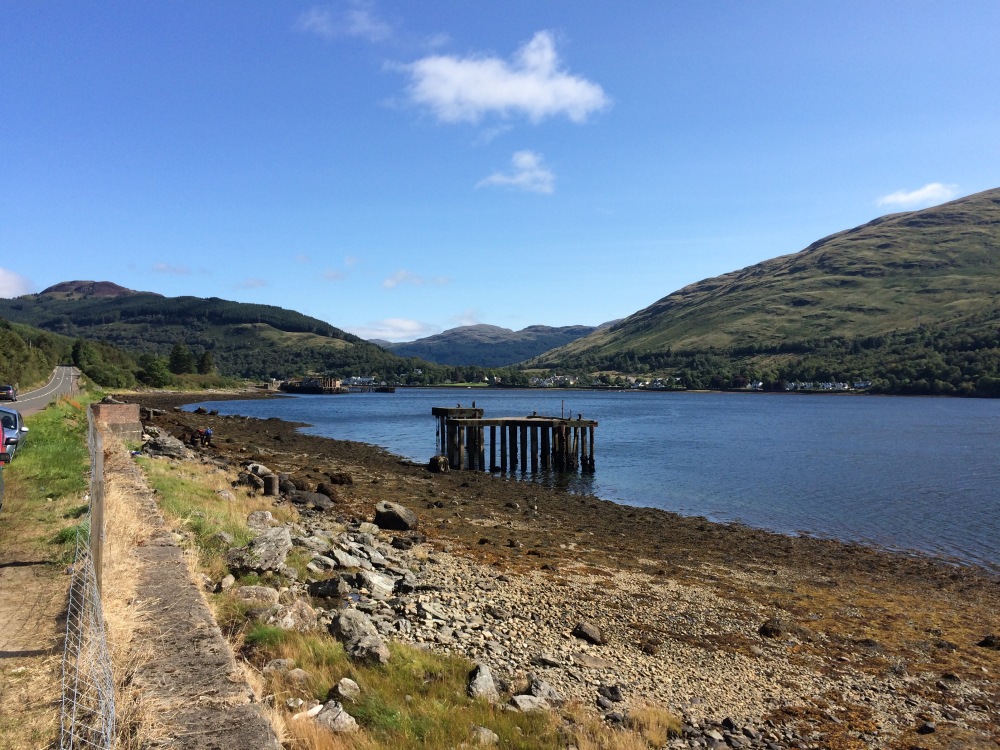 I arrived home from holiday today, to find the September issue of Scuba magazine waiting for me on the doorstep. I am both delighted and honoured to find that not only does it contain my feature on shore diving in the North of Scotland, but I also have the cover shot with my image of a purple nudibranch (Flabellina pedata). This lovely image is one of two nudibranch shots discussed in the regular Photo Quest column, which I write jointly with my dive buddy Trevor Rees. 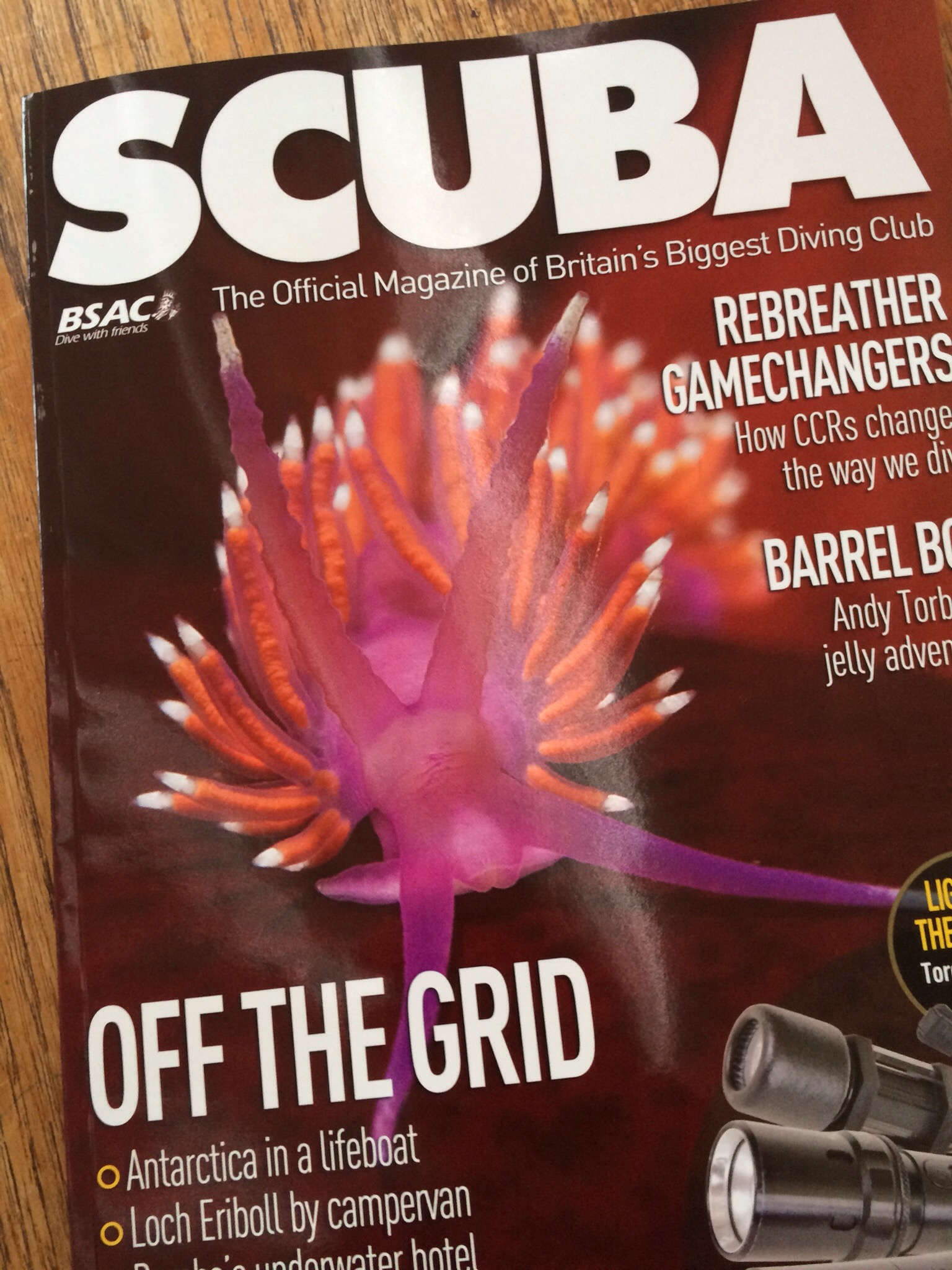 The image was one I took a few years back on the breakwater at Plymouth sound. I was very pleased with the image and entered it for several competitions, with no luck at all. A large print of it hangs on my kitchen wall and I often looked at it and said to myself “that’s a strong image”, and over time it has won me a big competition prize, as well as this cover shot. It just goes to show that sometimes you need to stick to your guns and not be discouraged. 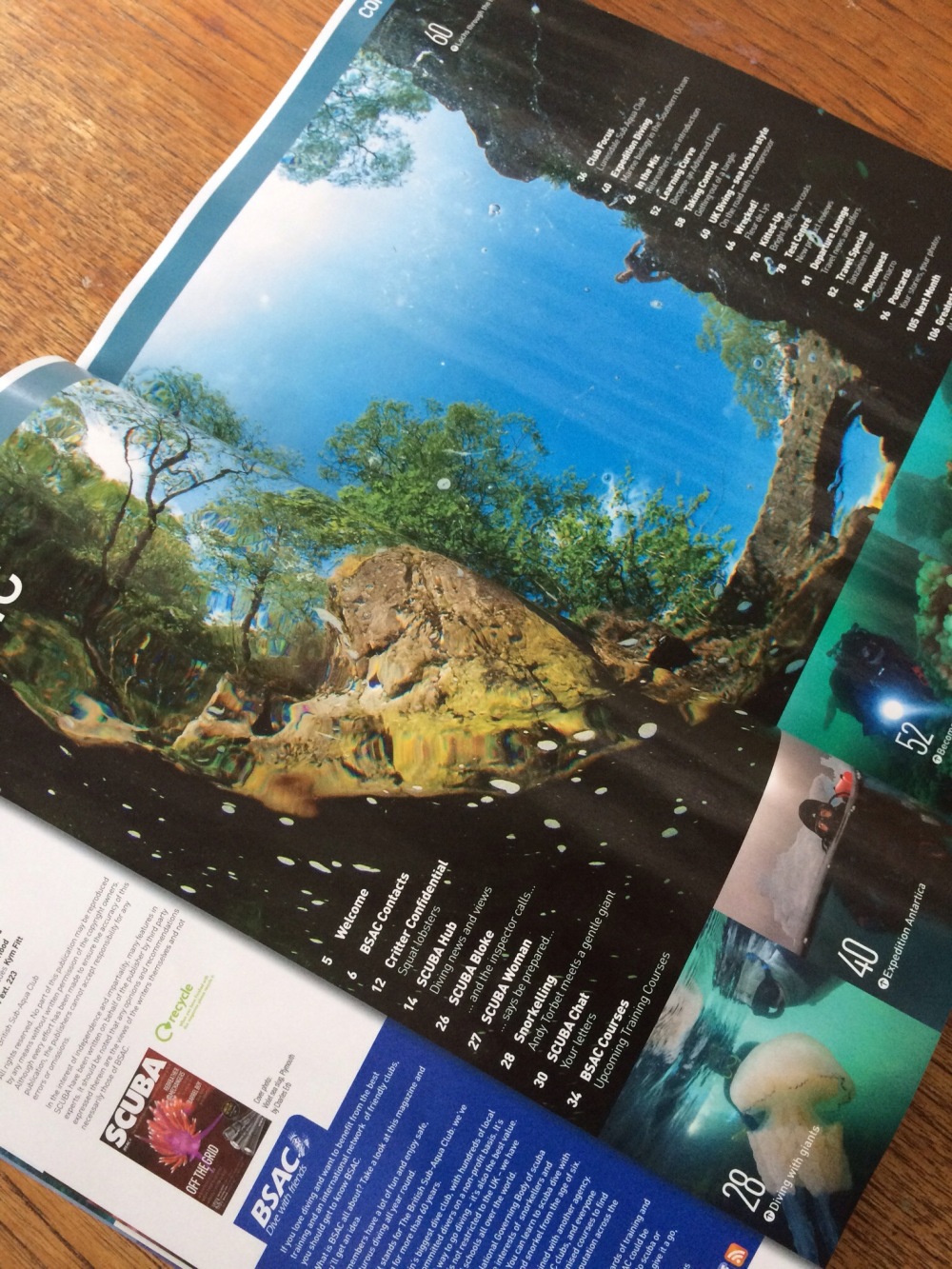 The feature, “Two snappers, a compressor and a campervan”, tells the story of a road trip I took with my buddy. Our aim was to dive the most northerly sea loch in mainland Scotland, but the motivation for doing this was to try to find some rarely (never?) dived shore dive sites, in more remote locations away from the usual limitations of dive centres and RIB launch points. We certainly had a most enjoyable week; like any “expedition” dive trip, we had our share of dud sites and challenging clambers into the water, but it was worth it for the collection of really memorable dives we did discover. 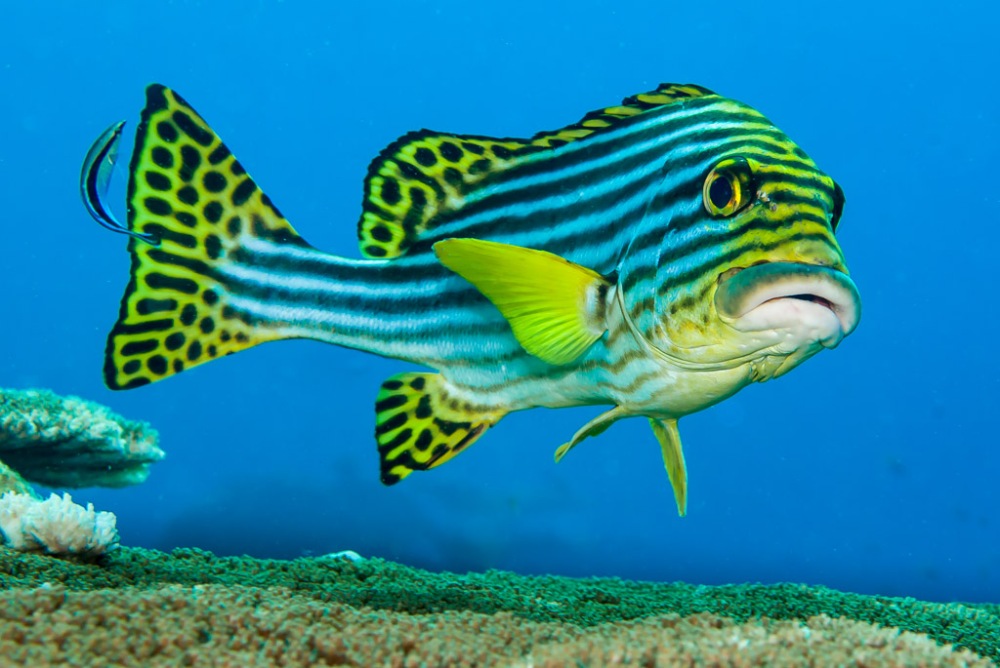 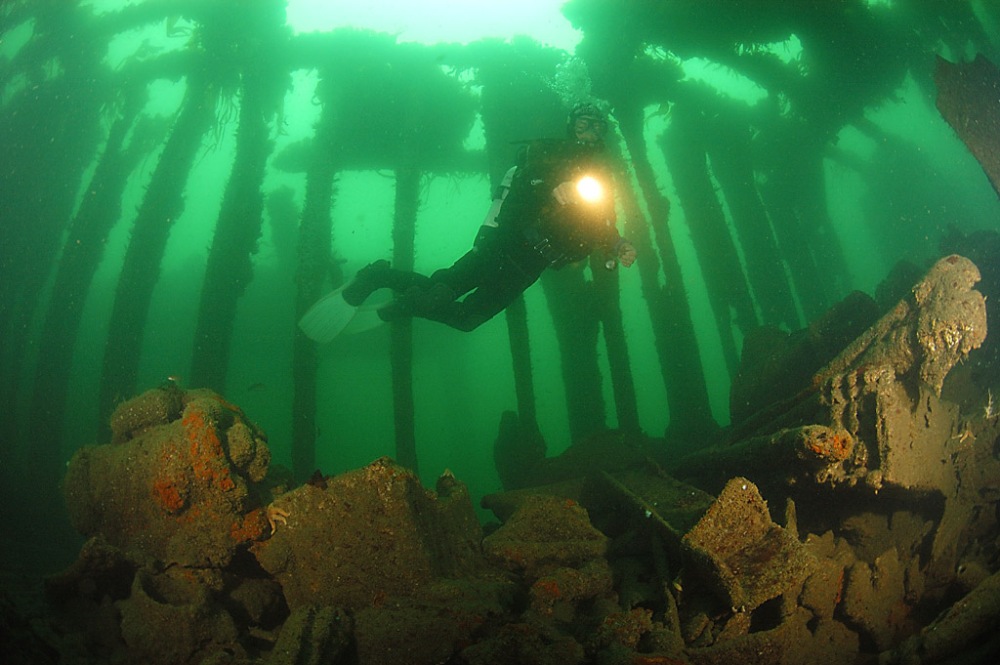 I am very proud to have been offered a regular column in Scuba magazine. It is an interesting commission because each monthly article is written jointly with my long-time dive buddy and fellow underwater photographer Trevor Rees. Each month, we are showing a pair of images and using them to exemplify a particular photo subject or style. It’s just as well that Trevor and I get on well, because it has taken quite a lot of discussion to evolve our own style and I’m grateful for the advice and encouragement of Scuba editor, Simon Rogerson.

We started with some obvious topics – wrecks, fish, big animals – and we’re hoping to touch on the whole range of underwater photography, UK and overseas. We’re trying to focus on camera technique, rather than post-processing and also to keep to ideas and advice that divers can try, regardless of their camera kit. I’m looking forward to shooting some images to demonstrate our ideas and I hope that the series might inspire others to take photos underwater, especially in the UK. 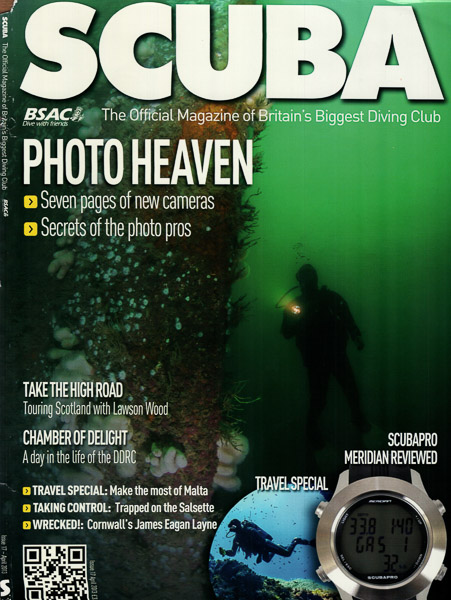 I’m really proud to be asked for an image to adorn the cover of Scuba magazine this month (Issue 17, April 2013). I was approached to provide an image specifically of the wreck of the James Eagan Layne, a liberty ship torpedoed by U-339 in 1945, which came to rest on the seabed in Whitesand Bay, just West of Plymouth.

This is a site I know really well and have many images of. I chose this image, which was taken in June 2005 at the bow, looking up with my underwater photography buddy, Trevor Rees acting as a model. It was shot using a Nikon D100 camera with Nikon 10.5mm fisheye lens and lit with dual Sea & Sea YS-90 strobes, at a depth of probably 15-20m. 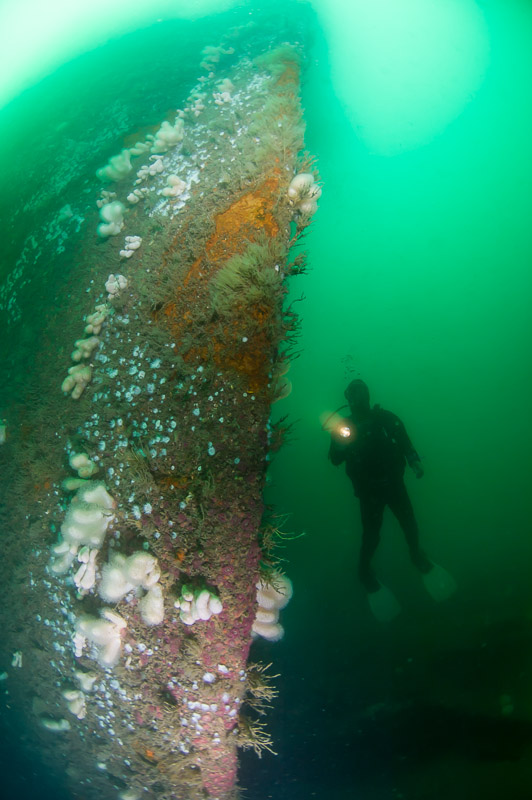 The shot shows the vertical profile of the bow, which is well encrusted with marine life, particularly dead mans fingers (Alcyonium digitatum). I was very pleased to get a pleasant green tone to the water; often when looking up towards the surface, unpleasant artefacts are produced as the camera struggles to cope with the dynamic range. I have avoided this by not facing towards the sun and because I am quite deep.

This weekend saw the annual British Society of Underwater Photographers (BSoUP) “splash-in” championships. Its a weekend I always enjoy because Plymouth, where it’s held, provides very varied dive sites and, whatever equipment the participants use, we are shooting in the same conditions. See this wetpixel article for an account of the event.

This year, I chose to dive solo and shoot a self-portrait. I had arranged some extra arms on the housing, so I could prop it up and aim the camera where I wanted. I found a nice location on the bow of the Scylla, just feet from the shot line. The technquie involves setting up the interval timer on the D200, swimming round into position and then gurning at the camera.

I was pleased with the composition and exposure, but I think I still have some way to go as a model! However, I was very pleased to win the “Mankind in the Sea” category with this image.

I am really proud to have a feature on shore diving (“Explore the Shore”) in the June 2012 edition of Scuba Magazine. This is a subject close to my heart. I love the flexibility to decide where, when and how long to dive for. There is a special excitement to exploring a remote stretch of shore, perhaps previously un-dived.

This type of relaxed diving tends to produce my best photographic work too. Shore diving also fits in very well with camper vanning; my ‘van lets my buddy and I access diving locations which would be pretty difficult to explore otherwise. Here’s to my next expedition….. 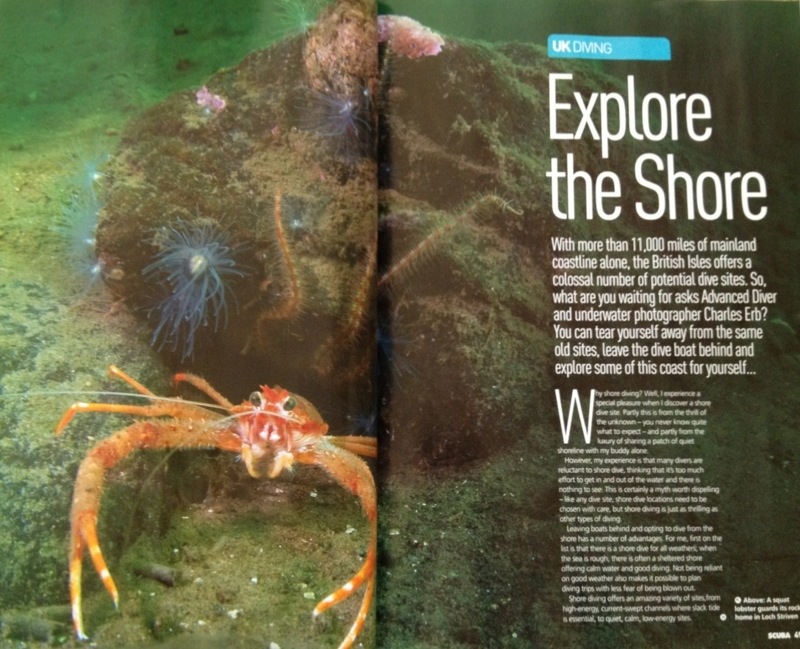