Exploring sea lochs, I tend not to dive in places with strong tidal streams, because currents and photography do not usually go well together. However, the part of Loch Creran we chose today was definitely scoured by current. We managed to avoid strong currents by diving at high water (though even at slack the water was eddying around) and boy was this site a find. The sea bed was so clean and the site abounded with species quite different to those seen just a few hundred metres away in parts of the loch not affected by currents.

A good example is this rather fine Flabellina pellucida (not to be confused with Coryphylla browni), which was present in large numbers and huge in size too(4-5cm). This image was captured using a Nikon D200 and 105mm macro lens, fitted with a 4T dioptre. 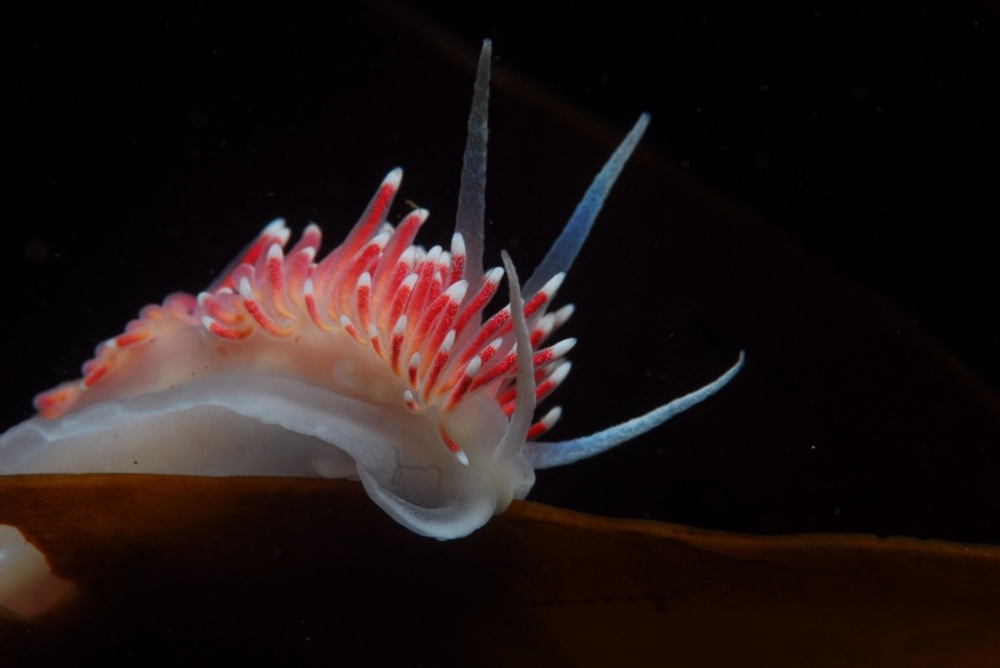 I have been very lucky in my regular February sojourns to Scotland. They have been very productive photographically and we have been blessed with more than our fair share of good weather. The weather on this trip has been quite a bit more, er, Scottish this time. There’s a saying about Scottish weather that if you don’t like it, wait 5 minutes and that has certainly been true today. The common factor has been a keen southwesterly, but we have had sun, rain, sleet and horizontal hail.

We have manage two good dives, though. Due to the steady rainfall over the last few weeks, the heads of the sea lochs seem pretty murky, so we moved to a site which we hoped would be less affected by run-off; we went to the stretch of water in loch Linnhe by the island of Shuna.

This site is easily accessed from a handy car park via an old slipway into the water. Once in the water, the a steep rocky bank slopes steeply to a gentle silty slope to 20m plus. This combination offers a wide range of subjects from those which frequent rocky substrates, to the classic low-energy site denizens.

For example, the sound of Shuna is home to all three UK species of sea pen and I made these the focus of my efforts today. I chose my 105mm macro lens with a 4T dioptre and a snoot made from the end of the sleeve of an old drysuit. I was very pleased with my results and managed close-ups of the polyps of these strange and beautiful animals.

The phosphorescent sea-pen (Pennatula phosphorea) is probably the most attractive, with its chunky pink body, but the elegant Tall Sea Pen (Funiculina quadrangularis) has the largest and most impressive polyps. One needs careful technique in this still water and fine silt, not to mess up the visibility. The snoot on the strobe helps to keep backscatter under control, but means that the strobe needs to be aimed carefully.

Hopefully, the results speak for themselves. These subjects look quite exotic and show the quite exquisite fine detail of these beautiful animals.

Today was my first salty(ish) dive of 2014. In what is now a tradition, my dive buddy and I find ourselves on the sea loch shores. This time, it’s Loch Creran. We couldn’t see a name for the location, either on the chart or the ordnance survey map, so we’ve called it Otter Rocks, after the pair of otters we watched swimming and feeding along the shore of the loch this afternoon.

Although the weather is quite mild (fine today, wetter as the week goes on), the water is quite cold. I’ve brought lots of layers for my under suit; let’s hope I’ve brought enough lead too!

Underwater, there was plenty to see: rays (and egg cases), clingfish, bib and the ubiquitous squatties, hermits, urchins, starfish. Even thought the site has that very fine silt characteristic of upper sea lochs, the creatures were quite clean, though the rocks looked pretty barren without kelp on them.

Today, I was trying my hand at super-macro (which I’m defining as better than 1:1), so the name of the game was to look for the tiny dramas. I chose my Nikon 60mm macro lens paired up with a Kenko 1.4x teleconverter. This gives me the chance of better than 1:1, whilst maintaining my working distance to the subject. It’s a trade-off really: too close and you spook the subject; too far and the water column steals the contrast and adds “snow”.

My 60mm (older, non-AFS version) has a close working distance, which suits the poor vis of this site, but does have a tendency to “hunt” rather. However, because this lens is comparatively slow focussing, it’s controllable though requires patience. I really enjoyed just laying still and watching all the tiny fish and crustaceans go about their business, just as soon as the giant invader with the camera stopped stirring things up. I only managed 50 mins before the cold got to me, though. I must be going soft!

Here’s a little clingfish I found. I’ve not seen many before, but their colour and somehow dog-like personality make them an attractive subject.